Note: Update on contents, thanks to Norman Scott who was turning music for Charles Smitton at the time.

Quote: “This programme is a mixture of two broadcasts. The hits of 1943 and the hits of 1964 are taken from Charles’ 21st Anniversary broadcast played on the 4/14 Wurlitzer in the Gaumont Manchester on 18th December 1964. I know for certain as I was turning over the music for Charles.  It started with Twenty One Today instead of his usual signature tune Estrellita and continued with Liberty Bell which was the first tune Charles played on his first broadcast from the Curzon Old Swan Liverpool on the same date in 1943. After the 1964 hits he finished with Leroy Anderson’s Christmas Festival. The remaining items on your programme are indeed played at Kilburn.”

• Broadcast mid-December, 1964
• 4-16 Wurlitzer, Gaumont State Theatre, Kilburn, London
• While I have considerably cleaned up and enhanced the audio, there are still sonic imperfections due to the taping from AM/Medium Wave.
• Listen to a snippet of the original file: 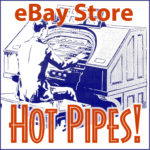